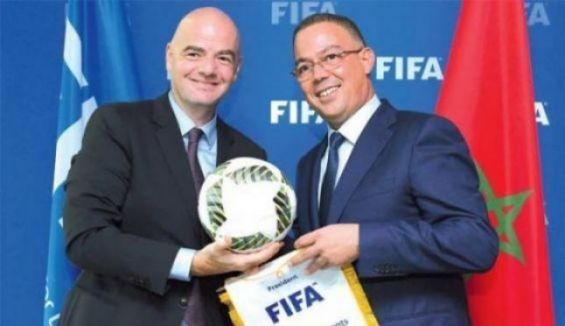 Marrakech will host from the 15th to the 19th of January a meeting set to examine the number of teams that would participate to the 2022 World Cup in Qatar, reports the Spanish sports online newspaper AS.

During the same meeting, FIFA will examine the feasibility of a joint bid, bringing Morocco, Spain and Portugal together for the 2030 World Cup.

For the record, speaking after a meeting of the UEFA executive committee held Monday, the European soccer’s leadership president Ceferin said that he would not accept a world cup bid that involves two different continents. «I’m not in favor of cross-confederation bids», he firmly announced. 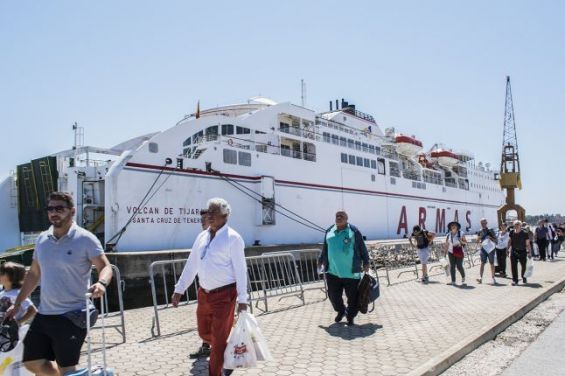 A new ferry line might link the algarve city of Portimão to Morocco./Ph.DR.

Portugal wants to link by ferry the Algarve city of Portimão to Spain and Morocco, says the Portugal News Online.

The announcement was made on Tuesday 18th of July at the official reception ceremony of the «Volcan de Tijarafe», a ferry that started recently linking Funchal in the Portuguese archipelago Madeira and Portimão in the Algarve following a six-year hiatus.

Several distinguished officials attended the ceremony including the Portimão Mayor Isilda Gomes and the Minister of the Sea Ana Paula Vitorino, and chief executive of the Port Administration of Sines and the Algarve José Luís Cacho. They discussed the possibility of connecting the city to Spain and Morocco.

«For the future, ferry connections are being evaluated for Spain and Morocco», said José Luís Cacho.

This project will be the first ferry line to link Morocco to the south of Portugal. 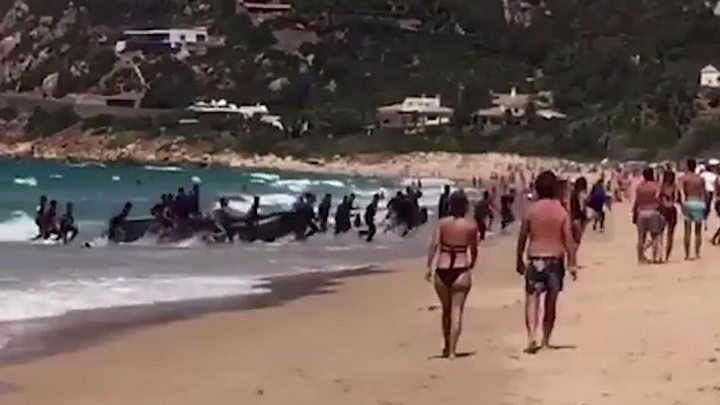 Three times as many migrants have arrived in Spain so far this year compared to the same period in 2016, the International Organization for Migration (IOM) says.

The shift may be because migrants are finding the Spanish route safer.

Earlier this week, footage showed migrants arriving by dinghy on a beach in Cádiz to the surprise of beachgoers.

“We assume that some of the change is due to the fact that the route [to Spain] is considered a safe route up to the coast through Morocco,” Joel Millman, a senior IOM spokesman, was quoted by AFP news agency as saying.

“It’s possible that Spain will outperform Greece this year,” Mr Millman said. “If so, that’s a big change.”

Many of those opting for the longer route to Europe are from west African countries including Senegal, Gambia, Guinea and Ivory Coast.

Spain is still far behind Italy, which received 96,861 until 9 August, according to the IOM.

Overall numbers have fallen by almost 60% from the same period the previous year.

On Thursday, coastguards in southern Spain said 10 men from sub-Saharan Africa were rescued off Tarifa.

The coastguard said they were on a rickety boat off the southern town of Tarifa, in Cádiz province, where a boat full of migrants landed at a popular tourist beach on Wednesday, stunning tourists.

According to AFP, nine of the 30 or so migrants who arrived on the beach on Wednesday had been found.

They are all minors in their teens and, while they did not have any ID on them, are thought to be from Morocco, police were quoted as saying.

They will be taken to migrant reception centres, where they can apply for asylum in Spain, AFP adds.

The charity Médecins Sans Frontières (MSF) says Spain’s reception centres arealready overloaded and do not respond to the needs of the thousands of “desperate new arrivals”.

Earlier this year thousands of protesters called on the Spanish government to allow people fleeing war-hit areas such as Syria in the country.

A note on terminology: The BBC uses the term migrant to refer to all people on the move who have yet to complete the legal process of claiming asylum. This group includes people fleeing war-torn countries such as Syria, who are likely to be granted refugee status, as well as people who are seeking jobs and better lives, who governments are likely to rule are economic migrants.

The Moroccan central bank announced this week it has approved five Islamic banks, fulfilling a long-standing promise of the Islamist party leading a coalition government since 2011.

Among them are leading national banks Attijariwafa, linked to the royal family, state-owned Banque Centrale Populaire and private BMCE Bank of Africa. All three hold increasing assets around French-speaking Africa.

The others are CIH Bank and Credit Agricole du Maroc.

Four of the five will be partnerships between Moroccan banks and Islamic financial institutions in the Gulf.

Morocco had long been reticent about Islamic finance, but now sees it as a growth prospect.

Sharia forbids interest, which is central to many banks’ operations. 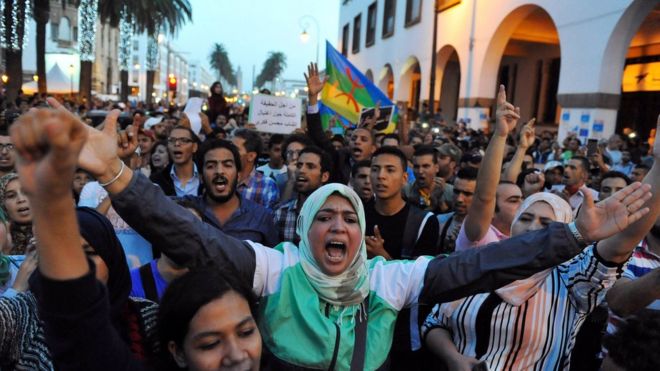 Thousands of Moroccans have held protests in several towns and cities after a fish seller was crushed to death in a refuse lorry trying to retrieve fish confiscated by police.

The death of Mouhcine Fikri in the northern town of Al-Hoceima on Friday drew widespread anger on social media.

His death drew parallels to that of a Tunisian fruit seller in 2010 which helped spark the Arab Spring uprisings.

The interior and justice ministries have also pledged to hold an investigation.

The anti-government protests, on a scale rare in Morocco, were called by activists of the February 20 movement, who organised demonstrations during the Arab Spring in 2011.

Angry postings on social media referred to “Hogra”, a term for official abuse and injustice.

“I have never seen such a crowd in the last few years, since 2011 at least,” said Houssin Lmrabet, an activist in the town of Imzouren where a protest followed the funeral of Mr Fikri.

“Everyone feels crushed by that garbage truck here.”

Protests were also held in Al-Hoceima, Casablanca and the capital Rabat.

Police had confiscated and destroyed Mr Fikri’s swordfish because it is not allowed to be fished at this time of the year, according to Moroccan media.

Video circulating on social media appears to show Mr Fikri jumping into the back of the refuse lorry to retrieve his fish, before being crushed to death by its compactor.

Interior Minister Mohamed Hassad vowed to hold a speedy investigation into exactly what had happened.

“No one had the right to treat him like this,” he told the AFP news agency.

“We cannot accept officials acting in haste, anger or in conditions that do not respect people’s rights.”

The incident evoked memories of Mohamed Bouazizi, the Tunisian fruit and vegetable seller who doused himself in petrol and set himself alight after officials seized his goods in December 2010.

Public outrage at the incident led to overthrow of then-president Zine El Abidine Ben Ali and the unrest spread to Egypt, Libya and other countries in the Arab world.

(Reuters) Global warming is on track to disrupt the Mediterranean region more than any droughts or heatwaves in the past 10,000 years, turning parts of southern Europe into desert by the end of the century, scientists said on Thursday.

Average temperatures in the region have already risen by 1.3 degrees Celsius (2.3 Fahrenheit) since the late 19th century, well above the world average of 0.85C (1.5F), according to the study led by France’s Aix-Marseille University.

Man-made climate change “will likely alter ecosystems in the Mediterranean in a way that is without precedent” in the past 10,000 years unless governments quickly reduce greenhouse gas emissions, the researchers wrote in the journal Science.

With unchecked warming, deserts would expand in southern Spain and Portugal, northern parts of Morocco, Algeria and Tunisia and other regions including Sicily, southern Turkey and parts of Syria, it showed.

And it would dramatically shift vegetation in the region, famed for umbrella pines, olive groves, and holm oaks.

Last year, almost 200 governments agreed in Paris to limit the rise in average world surface temperatures to “well below” 2C above pre-industrial times, ideally 1.5C. Governments will meet in Morocco next month to review the accord.

Only the 1.5C global goal would ensure Mediterranean ecosystems stay within bounds of the past 10,000 years, the study said. Debate about cutting emissions “is urgent for such sensitive regions,” lead author Joel Guiot of Aix-Marseille University told Reuters.

The Mediterranean is sensitive to global warming partly because Atlantic storms are likely to shift northwards, meaning more sun and less rain.

The scientists reconstructed past climates by studying pollen in layers of mud in lakes. More oak pollen, for instance, suggested humid and temperate climates while more fir and spruce pollen indicated chillier conditions, he said.

In history, some natural hot periods and droughts have coincided with social upheaval in the Mediterranean region, such as around 1400 when many people in the Ottoman Empire abandoned unproductive farms to become nomads.

Last year, a study in the U.S. journal Proceedings of the National Academy of Sciences said there was evidence that man-made climate change had added to a 2007-10 drought in Syria that was a contributing factor to the civil war.

And Thursday’s research did not consider other changes in farming that can hasten desertification, such as around Almeria in southern Spain.